North Country Fiddle and Dance is a non-profit organization whose overriding mission is to build community by carrying forward our North American cultural heritage of traditional music and dance. This mission is implemented in the initiatives listed below.

1) The organization will provide a focal point for those interested in traditional music and dance, as well as for those looking for a meaningful and participatory recreational activity. Toward this goal, the group holds several public community dances per year, where simple folk-dances including reels, squares, contras, and circle mixers are taught and no experience is necessary for participation. To make the dances affordable for all, there is no admission fee. Donations, however, are accepted at the door to help cover costs.

2) Members of the group, contingent upon their level of interest, may form ensembles of musicians and dancers to perform at various events around our region with the goal of preserving and promoting North American folk dance and music traditions. These activities raise awareness and educate people about the traditional cultures of the region.

3) North Country Fiddle and Dance will strive to form alliances with other existing or developing traditional music and dance organizations in the region that includes Minnesota, eastern North Dakota, southern Manitoba, Wisconsin, and Iowa. This is accomplished by cultural exchanges and joint activities that allow musicians, callers, and dancers to practice their art and learn from one another. 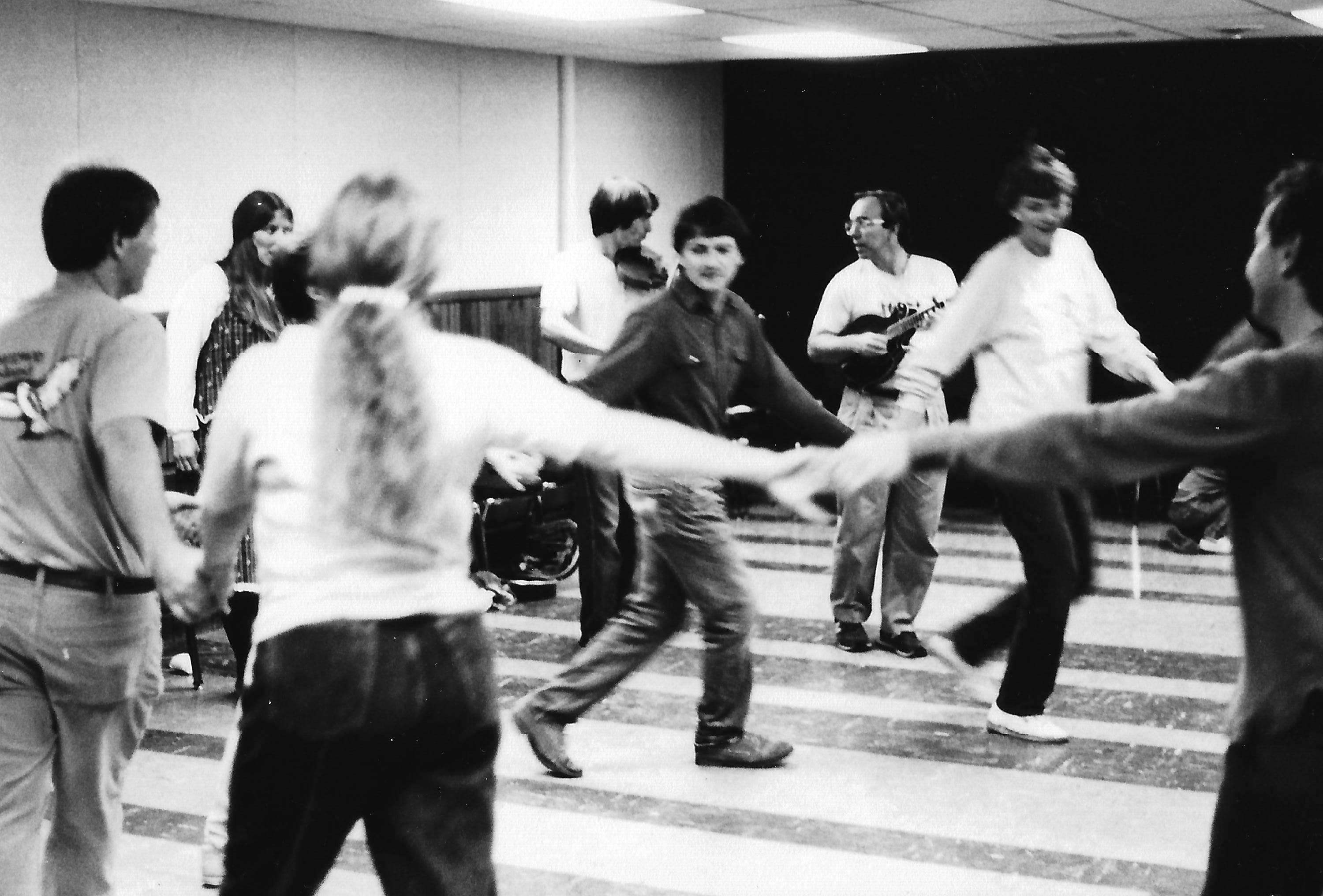 A dance at the Grand Forks Civic Auditorium, 1988

History of the Organization 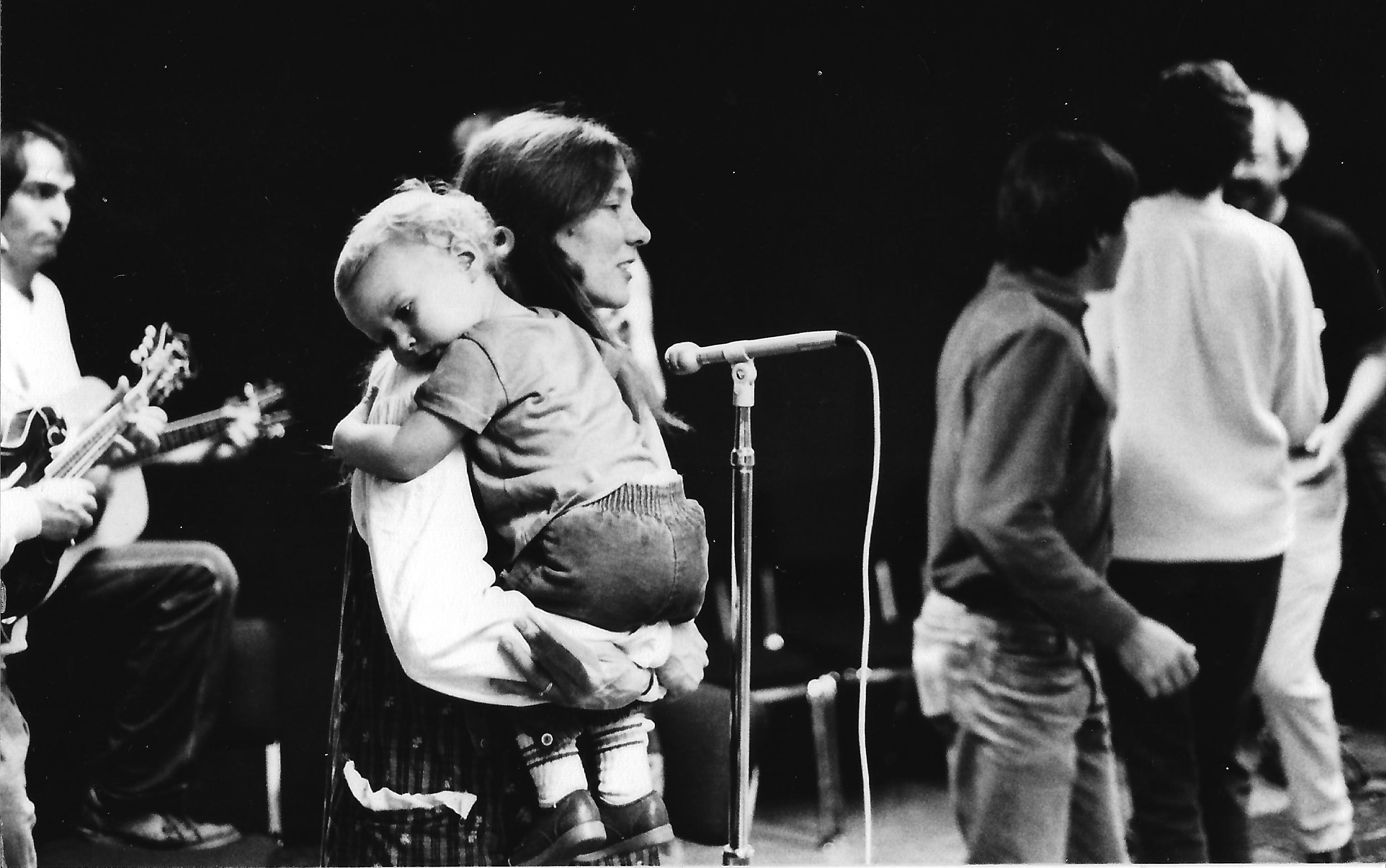 Since it was founded, the organization has been holding public community dances in the Greater Grand Forks area. In the early years the dances were held at various venues in Grand Forks and East Grand Forks, beginning at the Grand Forks Civic Auditorium near downtown (which was subsequently torn down). Other venues included the Josephine Cambell Recital Hall and the International Center on the University of North Dakota (UND) campus, the basement of St. Paul's Episcopal Church, the Grand Cities Mall Community Room, the Nancy Paisley Dance Studio, the North Dakota Ballet Studio, and the Senior Centers of both Grand Forks and East Grand Forks. Jeanne O'Neil was the regular caller, and the band was an informal group of local musicians that called itself the North Country String Band. 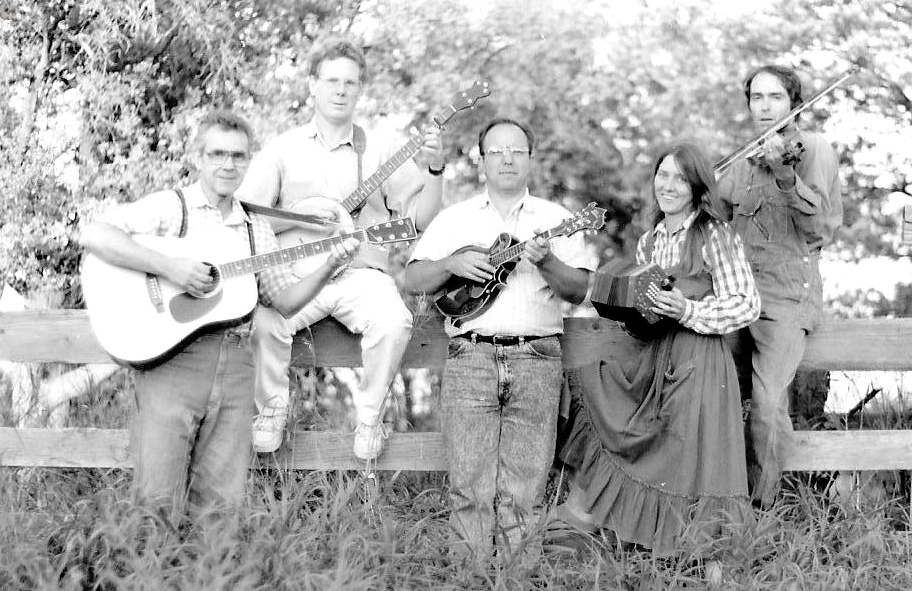 North Country String Band, 1991
The regular band members through the early years included Tom O'Neil (fiddle and guitar), Jeanne O'Neil (concertina), Mike Gregory (mandolin), Tom Lockney (guitar and banjo), Don Uhlenberg (guitar and banjo), Mark Bobmann (fiddle and mandolin), and Bruce Barton (guitar). In addition to the regular dances, the group held one or two special events per year that featured a performance by a visiting band or dance group. The visiting musicians would present a brief concert and then provide music for the dance, possibly joined by members of the North Country String Band. Many of the visiting musicians were from Canada, including Meadow Lark (1990), Parlour Tricks (1992, 1994), Hole in the Wall Band (1992), Nan and Martin Colledge (1996), Marty's Party (1997), and Whiskey Before Breakfast (1998) from Winnipeg; and On the Edge (1998, 1999) and Bill and Mariette Howatt (1995) from Manitou, Manitoba. In addition to the guest musicians, NCFD invited Ian Kirk, dancer and instructor with L&#39Ensemble Folklorique de la Rivière-Rouge from St. Boniface, to be the guest caller at a community dance in 1996. Several more special events are described in the section on concerts and collaborations below, and many of them were partially supported by small grants from local and regional arts organizations. The full list of grant-supported activities can be found by clicking Sponsors and Grants. 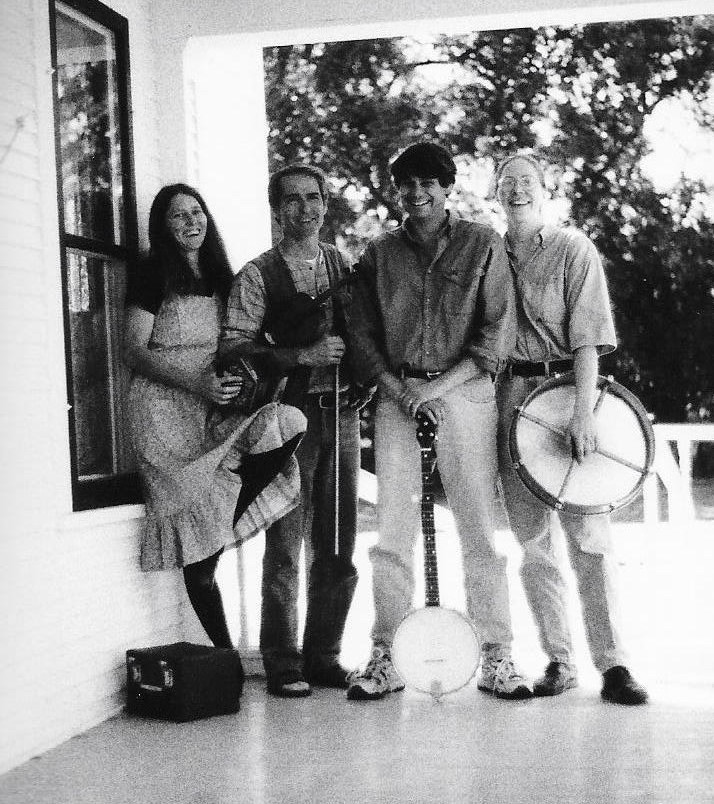 Jeanne and Tom with Bradin and Christina, 2001
In the early 2000's, the group made an effort to stabilize the venue and format of the community dances. The regular dances had been held without a sound system, and at times the attendance was high enough to overwhelm the caller and band, and the venue was continually changing. The North Country String Band was difficult to maintain due to retirements, graduations, job changes, and evolution of musical interests of the band members. Bradin Frieder (banjo) and his wife Christina played with the string band for a few years (2000-2001) after the departure of Bruce Barton and Tom Lockney. When Bradin and Christina left the area due to a job change in 2001, Jeanne and Tom invested in some sound equipment, negotiated regular room rental with the Grand Forks Senior Center, and began to book visiting musicians and established dance bands from the region for the regular dances. Jeanne continued to be the regular caller while Tom managed the sound system and played in the band as needed. The featured bands included the Tickwoods from Fergus Falls, the Ogg Creek String Band from Fargo, the Porch Stompers from central Iowa, Four Mile Portage from Duluth, Paul Wilson and Mary Abendroth from Brainerd, and On the Edge from Manitou, Manitoba. We also booked individual musicians and pairs of musicians to join Tom in forming a band. These musicians included Doug and Betsy Wells from Fergus Falls (members of the Tickwoods), Bob and Gail Johnson from Fergus Falls, Mike Gregory and Gerri Dunnigan from Grand Forks, Bob Walser and Julie Young from Minneapolis, Paul and Susan Hammer from Winnipeg, Alyce Berube from St. Boniface, and Ken Natrass from Winnipeg. Tom and Jeanne's daughter Erin, who was in high school during this time, had become a proficient fiddler and performed with her parents as the O'Neil Family Band. So Tom, Erin, and Jeanne (if she was not calling) filled the role of house band when guest musicians were not available. Guest callers during these years included Terrence Smith from Duluth, Tom Maloney from Duluth, John Peterson from Fargo, Bob Walser, Julie Young, and Tim Jenkins from Gays Mills, WI. 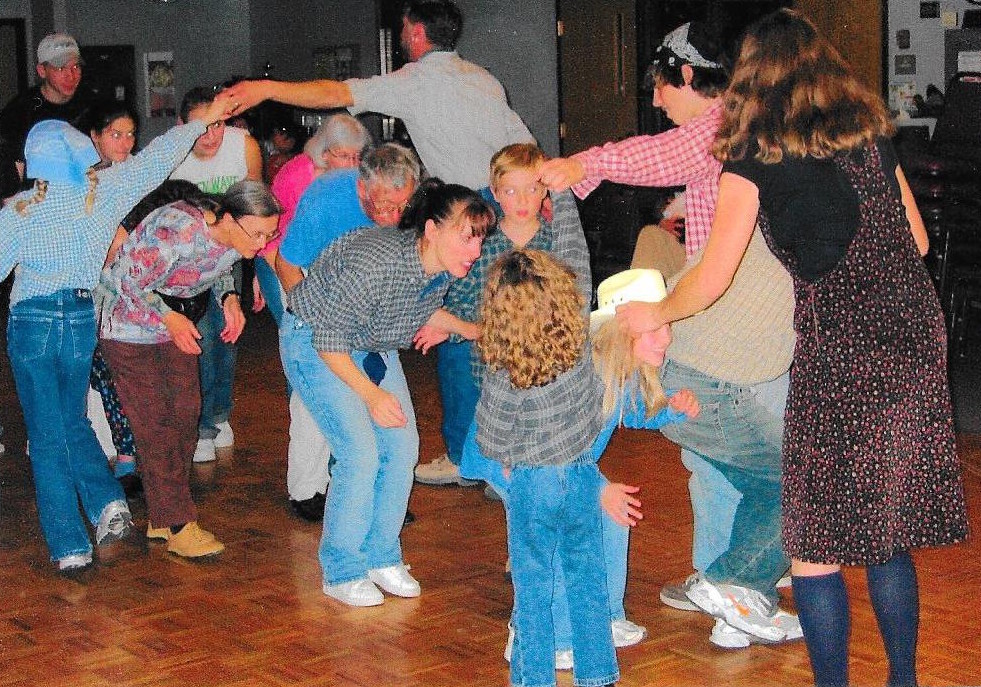 In about the year 2011, the managers of the Grand Forks Senior Center decided that it would no longer rent the facility to North Country Fiddle and Dance. So once again, we searched for a stable venue that was affordable. Jeanne wrote a grant proposal to the Northwest Minnesota Arts Council requesting partial funding for a year-long dance series. The proposal was successful, and we negotiated dates with the Eagles Club in East Grand Forks for our dances in the fall of 2011 and the spring of 2012. Since that time, Jeanne has written annual grant proposals to help pay the facility rent and the stipends for guest musicians and callers. Most of the dances have been at the Eagles Club, but we have also used the East Grand Forks Senior Center when the Eagles Club was not available. The format for the dances was unchanged, but the funding allowed us to bring in guest bands and callers more regularly. The Eagles hall also provided a larger space, large enough to accommodate a peak attendance of about 100 dancers in September 2012. In subsequent years, attendance declined from that peak to an expected size of 30 to 50 dancers -- a smaller group, but still ranging in age from kids to seniors, and always full of energy and enthusiasm. The data we gather for grant reports indicates that many of our dancers travel 50 to 100 miles to attend the dances. It also shows that each dance draws a significant number of newcomers. 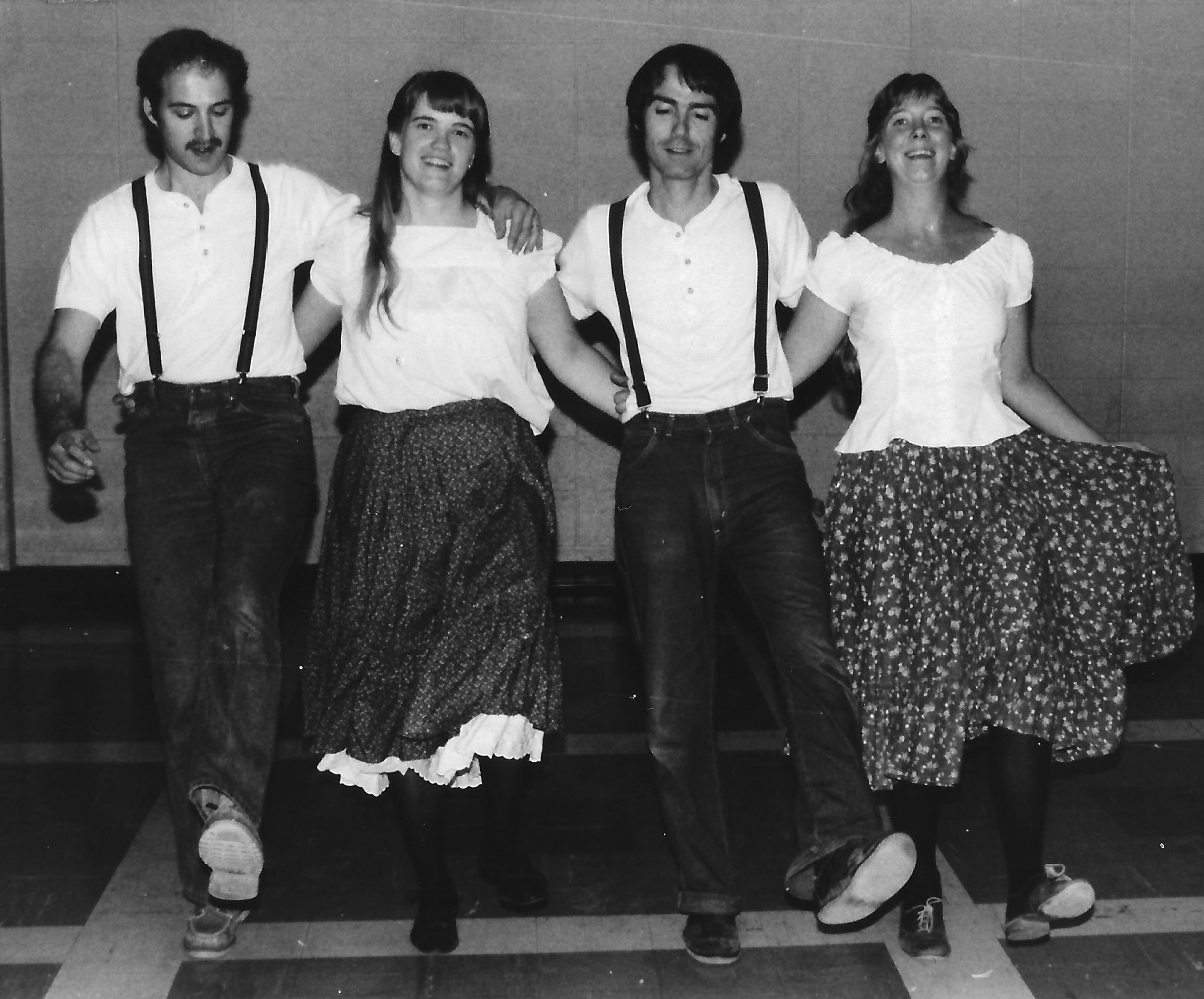 North Country Cloggers, 1988
Drawing upon Jeanne and Tom O'Neil's performing experience with the Onion Creek Cloggers in Iowa from 1978-1986, the group formed a performance ensemble in its early years that featured old-time string band music by the North Country String Band and demonstrations of Appalachian clogging (a percussive dance done to Southern fiddle tunes). The dancers included Jeanne and Tom, Mark and Margit Bobmann, Janie Franz, and Sally Finzel. The group performed at various community events around the Grand Forks area, including Summerthing at University Park and the Winterthing and First Night celebrations in downtown Grand Forks. 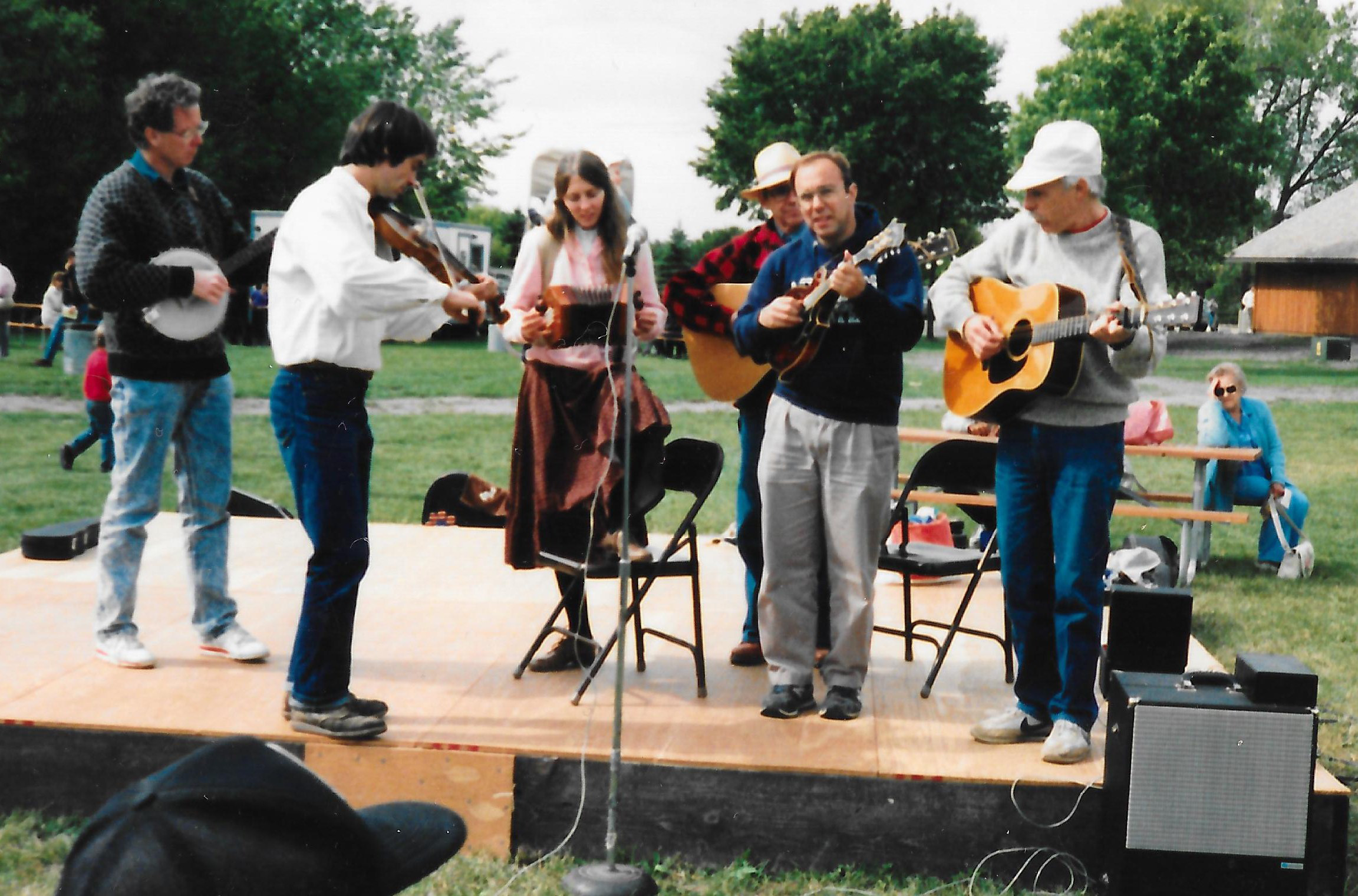 North Country Band at Shelvers Grove Old Settlers Days, 1989
The members of the group donated their time for performances, and the proceeds were used to support the NCFD public dances. The clogging group stopped performing when the Bobmanns and Finzels left due to job changes, but Jeanne and Laura Schafer continued to provide clogging and French Canadian step dance demonstrations at North Country Fiddle and Dance performances in subsequent years. 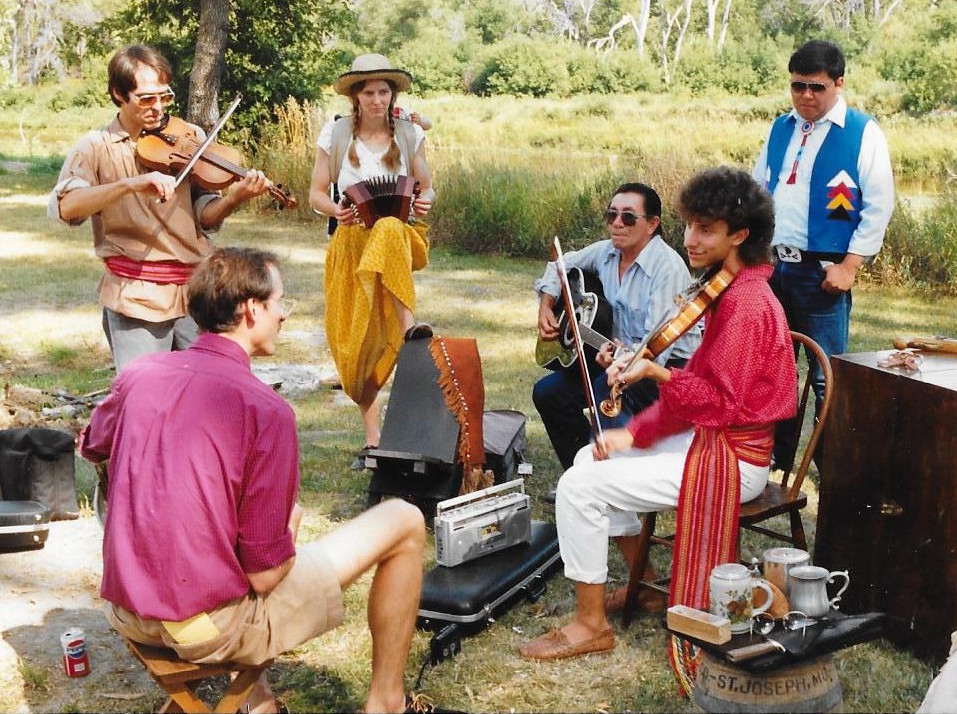